What They Did After the War 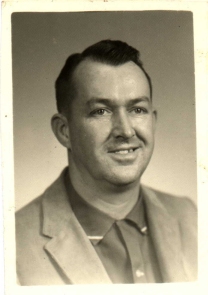 Al Locke in February 1961.
In the fall of 1945, Al resumed his studies at the University of Oklahoma in Norman.  In 1946, Al  was appointed as a first lieutenant in the Air Reserves.  He graduated from OU in June 1950 with a BS in Electrical Engineering.  In 1953 he was designated as a standby reservist with the 14th Air Force at Robins Air Force Base, Georgia.   Al worked for the Oklahoma Gas and Electric Company in Oklahoma City from 1950 until his death in 1972.   He published several research articles and served as a representative on a national committee planning the transition to the metric system by the electrical engineering profession.  At the time of his death, Al was supervisor, Department of Transmission and Distribution.  He was active in the Warr Acres Kiwanis and his church, Putnam City Baptist.

Al and his wife Patsy had three children; Linda born August 27, 1945, Jean born November 15, 1948 and Allen born March 21, 1951.  After the kids had all graduated from high school, Patsy went back to college and earned her degree in elementary education.  She completed her MA in Library Science in 1977, and taught school in the Putnam City school district in Warr Acres OK until she retired in 1987. Patsy is now married to Walt Oman, minister to seniors at Emmanuel Baptist Church in Pullman, Washington.   Linda is a professor of human nutrition at Washington State University, Spokane, and is the mother of Melinda Staley, who assembled this web page.  Jean is an interior designer and runs her own antique business in Oklahoma City.   Allen is an architectural engineer in Tulsa and owns his own engineering company.

After my discharge I returned to Quincy, Illinois, happy once again to be living at home with my parents.  I gave some thought to going back to my machinist’s trade, but because machine shops are frequently very noisy, I feared that doing so could be hard on my one good ear; furthermore, I did not relish the prospect of spending the rest of my working years turning out parts on a machine.  It could get very boring.
After a few weeks of debating what to do, I enrolled at Quincy College (now Quincy University) in September, 1946, with the idea of becoming a history teacher.  After what I had experienced during the war, I felt that I had something to pass along to adolescents.  Though not well known, Quincy College offered me a good curriculum and small classes and, perhaps most important, would let me live at home.  After being away for three years, I wasn’t ready to leave family and friends quite yet.
In the seven years which had elapsed since graduating from high school, I had forgotten all the grammar I ever knew; however, I was one of those people who wrote reasonably well in spite of not knowing grammar.  At any rate, I did well enough in the first semester of my freshman composition class that my instructor recommended that I be permitted to forgo the second semester of composition and be enrolled in creative writing.  He also believed that I was cut out to be an English teacher and encouraged me to switch from a history to an English major, which I did.  In later years when I found myself spending hours grading poorly written themes, I sometimes wondered if I had made a mistake; however, as things developed, I think I made the right decision.
Because I was twenty-six when I enrolled at Q.C., I wanted to get my diploma as quickly as possible.  As a result of maintaining a high grade-point average, I was permitted to take a heavier-than-normal course load each semester; thus, by taking extra courses and going to summer school, I completed the four years of undergraduate work in June, 1949, two years and nine months fter I began.  I subsequently received an M.A. degree from Drake University and qualified for a media certificate by completing twenty-four semester hours at Southern Illinois University at Edwardsville, Illinois.
About three months before I enrolled at Q.C., a couple with whom I had frequently double-dated arranged a blind date for me.  That blind date led to another and another and another.  We dated for five or six nights a week until April 9, 1949, when Mary Elizabeth Stickler became Mary Elizabeth VanBlair during my Easter vacation.  In spite of all the dating on top of a heavy class load, I managed to graduate with honors.  One mitigating factor was that I always came up with a class schedule that had no more than one class on Tuesday and Thursday, days which I set aside for studying and preparing assignments.
After my graduation, we moved to Vandalia, Illinois, where I taught high school English until 1953, when I accepted a position with the Champaign (Illinois) School District, where I taught English on the junior high level for three years, the last two of which I served as department chairman.  In 1956 we moved to Belleville, Illinois, where I taught English in the high school and rhetoric and American literature in the junior college.  The high school and junior college both belonged to District 201.  After a few years, most of my teaching was on the junior college level.
In 1965 the voters approved forming a separate junior college district, and I had to make a decision.  Should I stay with the high school and become chairman of the English Department as the principal had asked me to do, or should I go with the junior college.  I liked my junior college schedule of all American literature classes, but at the same time I felt attracted to the position of English Department chairman.  I liked our principal and knew I could work with him.  Also, as chairman I would have an opportunity to work with curriculum and, hopefully, bring about some improvement.  Because of the department’s size, I would teach only one class and thus have time to visit classes to see what was going on and to develop some ideas I had for the department.  After several changes of mind, I finally decided to stay with the high school.  Depending on student enrollment, I supervised from thirty to forty English teachers each year until my retirement in 1982.
Mary E. and I have been active in church throughout the years and strongly believe that the Lord has led us.  For example, both of our daughters are adopted, and each adoption came soon after each of the two moves we made, one to Champaign and then to Belleville.  In each case, we can see where He kind of gave us a gentle shove in the direction He wanted us to go.  He has brought Mary E. through several serious illnesses, two of which could very well have been fatal.  I am convinced that God enabled me to hold my breath as long as I did before surfacing when we ditched and that I would not have survived my time in the cold water without His intervention.  I also have to credit Him with bringing me through spinal meningitis in spite of the flight surgeon’s prediction to my C.O. that I would not be back.
A few years ago a friend and I were reminiscing about our WWII years.  He summed it up well when he said, “I wouldn’t take a million dollars for the experience, and I wouldn’t take a million dollars to go through it again!”

Update 9-18-2017: Dale passed on to Heaven on September 16, 2017. He was 96.
John Hortenstine
In 1986 I obtained the address of John Hortenstine, our navigator, and we began corresponding. When the 448th held a reunion in Hampton, Virginiain 1992, we met there and had a great time reminiscing.  The following information was gleaned from our contacts via letters and the reunion.
After the ditching, he served for about three months in Intelligence, then got to thinking that, according to regulations, if he went back to flying he could collect flying pay for the previous three months.  When we got together at a 448th reunion in 1992, he told me, "I got greedy and requested assignment to flying duty."  He served as an instructor for crews taking PFF training and also flew eight night missions scattering propaganda leaflets behind the German lines.
After the war, John, who remained in the Air Force Reserves, went back to Virginia Tech, where he was enrolled when he enlisted, and graduated in 1946 with a degree in chemical engineering.  He worked at various engineering jobs until he was recalled to active duty during the Korean War.  After flying sixty-one missions in a B-26, he returned to the States, then was sent to England for a four-month tour.  He was stationed at Alconbury, which is in the same area as Seething and Hethel, where we were based during WWII.  In his first letter to me in February, 1986, he wrote, “I even looked up some of my old English girl friends.”  John was discharged in 1952, but remained in the Reserves in the Air Transport Command until he retired as a lieutenant colonel at age 60.
After being released from active duty, John resumed his career as an engineer in Abingdon, Virginia, and later got involved in real estate.  When we began corresponding in 1986, he had quit his engineering practice but was still doing a “little real estate work,” as he put it, and then added, “I have a farm or two to keep me busy.”
John did not marry until 1971.  He and his wife, Molly, had one son, who was born in 1973 or 1974.  In early 1993 Molly called to tell me that John had died suddenly of a heart attack.
Dale VanBlair
Virgil Carroll and Frank Cappello are both deceased.  Dale located family members via the computer shortly after their deaths.

Errol Self - Errol Self's sister-in-law emailed Dale after she came across our web site.  She told him that he divorced his first wife and then later married her sister.  She said he had settled down and that they had had a good marriage.  At the time she emailed him a year or two ago, they were living in Missouri.
November 3, 2012-
A friend of the Self family let us know that Errol passed away October 20, 2012 in Joplin MO. He was 96.

Pedro Paez and Hank Boisclair- we do not know what they did after the war at this time.