Dale's Account of the mission and ditching on April 29, 1944

On the morning of April 29th we were assigned as deputy lead of the 466th group which was leading the 46th Combat wing on a mission to Berlin.  As we taxied our on the runway for takeoff, Capt. England, assigned as lead ship, sent word that, due to a dangerous bomb release, they would take off late and join us in the air.  We then took off, formed the wing, and formed the division, on course and on time.  Shortly afterwards, the engineer Sgt. Freeman, reported that two generators were out.  I asked him if the others were alright- he replied that they were, but that two generators wouldn’t last long with the extreme load of our equipment.  The Command Pilot decided to keep the lead, since there were none others he thought able to replace us.
We continued on course as lead, since the other lead ship didn’t show up (I later found out they had further mechanical difficulty).
Since we were draining excessive current I turned off the automatic pilot and all other electric source we could get along without so as to give full current to our special equipment for navigation purposes, there being a 6/10 to 8/10 cloud cover at the time.
When we arrived at the mission IP I informed the Capt. That we would have to bomb by PFF, though the conditions bordered on visual, since a checkup showed we had not enough current to operate the bombsight.  After entering the city, we obtained a direct hit on no. 3 engine by an 88mm shell which did not explode but tore through the wing leaving a gaping hole.  This however didn’t interfere with the bomb run, as we got bombs away about 2 minutes later, on the center of the city.
On leaving Berlin I feathered number 3 engine and the interphone and electrical system failed soon after.
The captain suggested that we take a course for home, since we were off course to the south.  But since we were with the division I suggested that we say with the other wings, fighter support being completely lacking and he agreed.
Coming back on course again fighters harassed us from the Magdeburg area to the Zuider Zee.
At two different times I saw about 30 nazi fighters “gang up” abreast and attack elements of our wing.
After progressing all the way across Germany, it became apparent that we were unable to lead the wing because of our slow airspeed and fluctuating power.  It was a continual fight to keep the manifold pressure under control on two of the remaining three engines.
We left the combat wing lead and came up to the rear of the formation, and almost immediately our plane was attacked by enemy fighters, who were driven off by the gunners, operating their turrets manually.  The attacks were repeated in about 15 minutes by other fighters, again without success.
We then picked up escort of two P-47s by firing flares since we were unable to keep up with the formation.

This patch is the insignia of The Goldfish Club.  Pilots and crewmembers who survive a plane ditching are eligible to join.  Al Locke joined the club sometime after the ditching, but we are unsure of exactly when.  It was originally an RAF/RCAF club, and was adopted by American aircrews although it was an unofficial insignia.  Because it was unofficial, it was worn under the lapel, out of sight since you could be busted for "being out of uniform" for openly displaying it.

A graphical representation of the 8th Air Force ditching and rescue numbers for WWII. 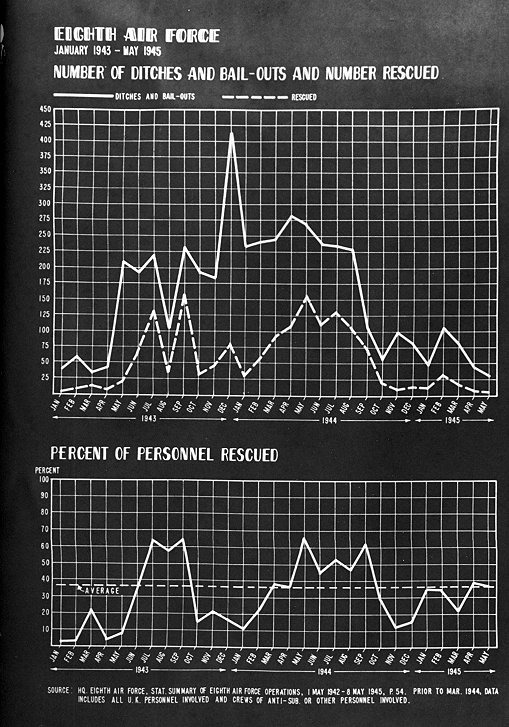