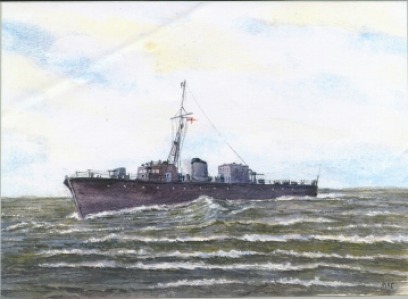 This watercolor painting was done by Don Macintosh, Skipper of RML 512, 60th RML flotilla, Royal Navy.  The 60th RML Flotilla was based at Great Yarmouth.  RML 498, which rescued the Al Locke crew after their ditching on April 29, 1944, was also a member of the 60th RML Flotilla.

A History of Rescue Motor Launches by Don Macintosh

RMLs (Rescue Motor Launches) were introduced by the Royal Navy's Coastal Forces branch in the spring of 1942 to extend ASR (Air-Sea Rescue) cover of the North Sea and English Channel which, up till then, had depended mainly on the small fast launches (HSLs) of the RAF Marine branch and, often, by the volunteer civilian crews of the Lifeboat Service.

Their arrival was timely, with the first operational flotillas in place when the RAF launched the initial thousand bomber raid on Germany, signalling its intention of intensifying the air offensive that would contine until the end of the war and would soon be joined by the 8th USAAF.

RMLs did not have the speed of the HSLs, but they had a much greater range and, though wet and uncomfortable for the crews and with its own possible dangers, stood up to severe weather conditions that the HSLs were never designed to endure.  They had Royal Navy crews and operated under local RN Commands, though in close liaison with the RAF and the 8th USAAF.

Boats were a version of the Fairmile Marine "B" design which were already carrying out a variety of duties, including coastal convoy escorts, minesweeping and anti-Eboat and anti-Uboat patrols.

They were of wood construction, assembled in peacetime boatyards from prefabricated components produced by woodworking plants iinland.

To crews, it was made clear that, while nominally warships, theirs was to be a humanitarian role with no discrimination between friend and foe in distress.  To make the point, decks were bright yellow for easy recognition from the air but also with the hope that it might be accepted, as the Red Cross was supposed to be in wartime, as indicating a non-belligerant purpose.

Unfortunately, it did not take long to find out that yellow decks were no guarantee of immunity from attack and they were repainted grey.

However, the original concept of non-belligerance remained and crews were recommended not to pick a fight but to be ready to retaliate at once if attacked.  So, armament was for defence, mainly against aircraft, which were thought to pose the greatest threat.

Again there had to be a change from the original thinking because, with some searches taking boats uncomfortably close to the enemy coast, the risk of attack from surface craft was just as likely as from the air.  Some of the anti-aircraft armament was replaced with a heavier weapon.

Now, no longer hoping for special consideration because of having yellow decks, boats could be used freely for anti-Eboat and anti-submarine patrols as well as continuing with ASR duties.

But by the end of 1943, with the 8th USAAF now adding its weight to the ongoing RAF offensive, giving the enemy no respite day or night, the RMLs returned to full-time ASR duty round the clock.

The method of operation was for boats to be stationed beneath the bombers' flightpath and remain there in whatever the condition until the appropriate Command had assessed details of aircraft safely returned, those known to be missing and, if not already known, those whose crews might be somewhere drifting in a dinghy.

Where there was a known or possible ditching, the nearest RML would be sent to search the area, sometimes patrolling through the night to be able to resume the search when a new day dawned.

For the RMLs there were many frustrations and disappointments when searches proved abortive, but despite these, many hundreds of lives were saved in quite difficult conditions, which helped to restore the balance.

For the ASR role, boats had a four-berth sick-bay on the upper deck, stocked with first-aid equipment and medical supplies to deal with emergencies, stretchers and survivors' clothing which, if not fashionable, was practical.

All this was under the supervision of a Sick Berth Attendant.  Another four berths could be made up in the officers' cabin (Wardroom) and, should there be greater numbers, the crews' accomodation would have been available.

It speaks well for the design and construction of these boats, wartime expedients though they were, that, adapted to a peacetime role, they were to be seen fifty years later in rivers and at seaside resorts giving pleasure cruises to holidaymakers.

The petrol engines have been replaced with more economical and safer diesels.  Bridges that were open in wartime are now enclosed and glazed, and there have been other modifications for the comfort of passengers.  Buit the main structure remains as when built.

The Fairmile Marine "B" was a remarkably robust, maneuverable and versatile design which, apart from when in foul weather, gave the crews, who lived aboard, a reasonable amount of comfort.

Its shortcomings were its dependence on petrol as fuel, which was a liability both in action and in harbour with men living aboard, and its slow speed, which was satisfactory for many duties but which, for ASR, was a handicap when speed of reaching a search area might have meant a matter of life or death for someone.

Length.  112 ft.  Beam. 17 1/2 ft.  Draught.  4 1/2 ft.  Tonnage.  100 approx.
Propulsion.  2 Hall-Scott 650 hp "Defender" engines giving up to 2000 rpm.  Cruising speed, 15 knots.  18 knots for up to 2 hours.   20 knots for twenty minutes.
Range.  With full tanks, 2500 gallons, 90 octane petrol, using 15 gal. per hour at cruising speed, about 700 miles.
Armament.  The original defensive selection of .5 Lewis, .303 Lewis and Oerlikon changed when a 2 pounder pom-pom replaced the .5s.  For anti-submarine patrols there were six depth charges.  For close combat with the enemy there were grenades and carbines and, if that lot did not put him off, there was a chemical smoke-making machine aft to cover our retreat.  I don't think it was ever used.
Crew.  C.O. and 1st Lieut.  (Exec.)
Cox'n.  Senior rating.
Motor Mechanic.  Next to Cox'n in seniority and responsible for everything that moved, apart from people.
2 Assistant Motor Mechanics.  Rated as Stokers.
2 Telegraphists, keeping 24 hour watch.
Sick Berth Attendant.
Cook.  Extra gunner in action.
Seamen-Gunners.  There were six.
Total complement, 16.