Planes They Flew with the 389th BG

This picture is what we believe the plane looked like with the PFF radar dome extended.  The plane was not officially named by the Locke crew; a later crew named it CYCLONE at some point.  This drawing was made by Ingemar Melin.
"Utterly Devastating"- name decided at the end of PFF training in March 1944.  This was John Hortenstine's (navigator) favorite saying.
SN 41-28714
Radio Call letter was H
B-24H Pathfinder
Manufactured at Douglas Aircraft, Tulsa OK
Natural metal finish
Assigned to 8th AF on 19 Mar 1944; 564th BS/ 389th BG

Note: The drawing of 41-28714 at the top of the page is not necessarily accurate. The name was never painted on the nose of the plane. I found reference to this name for their 389th plane in one of my Grandfather's letters to my grandmother, so this is how we are referring to it. Research Ingemar did on the serial number of the plane indicated that it should have been silver, not OD, so that is how we decided he would draw it. Dale remembered their PFF planes as being silver too. The actual photo of the plane we discovered later (see the "Cyclone" photo below) shows it being painted olive drab (OD).
Kelsey McMillan, the 389th's official historian, provided the following information about aircraft colors assigned to the group: It is possible, although that is not very likely, that 41-28714 could have been OD green first and then the paint removed leaving it NMF.  But a plane already assigned to the 2nd Bomb Division in its natural metal finish would have been painted OD green. A tech order dated November 3, 1943 stated that camouflage was no longer required on any VIII AF aircraft except Night Fighters. It further stated that the camo paint could be removed from existing AAF airplanes at the option of the Theater Commander or CG under whose jurisdiction the aircraft operated. Generally speaking, the removal of camo paint from A/C was a pretty low priority at that time because the 8th was too busy trying to keep the OD green aircraft that didn't get shot down flying. There just wasn't time and manpower for such things and the unfortunate attrition rate was turning the aircraft inventory from green to silver fast enough. The B-24 experts I know (guys from b24bestweb.com) say that 41-28714 was OD green.

They actually had three PFF planes.  The first, HSH 41-28673 A YO, was scrapped after they were sent out for their first mission after finishing PFF training.  They were told to fly to the base of the group they were to lead the night before the mission.  This would have been evening of March 22, for a mission on March 23 and Dale says that they were to lead the 453rd BG, which was based at Old Buckenham.  Immediately after landing the control tower turned off all the landing lights and Grandad couldn't see where to steer the plane.  The left landing gear ran off the edge of the runway and into some mud and was sheared off.  Luckily the plane didn't explode from all the leaking gas.  No one was hurt.  After that, all PFF planes were sent out early the morning of a mission.  That was a brand new PFF plane that had never been in combat and it had to be scrapped because the damage was so extensive.
The second PFF plane they flew was HSH 41-28714 HSH YO.  They flew this plane on their missions on April 1, 8, 13 and 18 as well as on April 12 when the Loading List is marked "Early return." 41-28714 went on to fly many more missions.
After Grandad flew it for the last time on Apr 18, 1944, it was flown by the following 389th crews:
Capt. R. Lamb (Apr 22)
1st Lt. L.J. Litwiller (May 13)
1st Lt. A.P. Tolley (May 25)
1st Lt. G.C. Douglass (Jun 2, 3, 5, 6, 11, 20, 21, 24 & 28)
41-28714 was transferred to 489th BG at Halesworth during the summer of 1944 before being ultimately declared war weary and salvaged by BAD #3, Langford Lodge, Northern Ireland. At some stage, it was given the name CYCLONE.
Their third PFF plane HSH 41-28784 F YO is, of course, at the bottom of the English Channel about 30 miles off of Great Yarmouth. A photo of this plane was recently found in Images of War:  Liberators in England in World War II, by Petger Bodle Fraes, p. 18, by an acquaintance of Dale and sent to us. His cousin flew in a mission in it on 4-22-44, one week before it's last mission with the Locke crew. 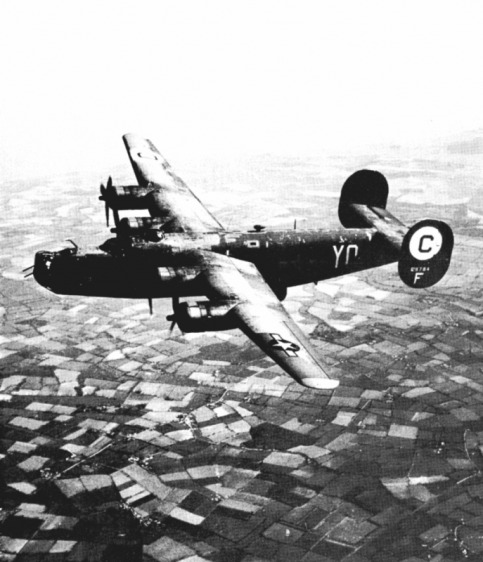 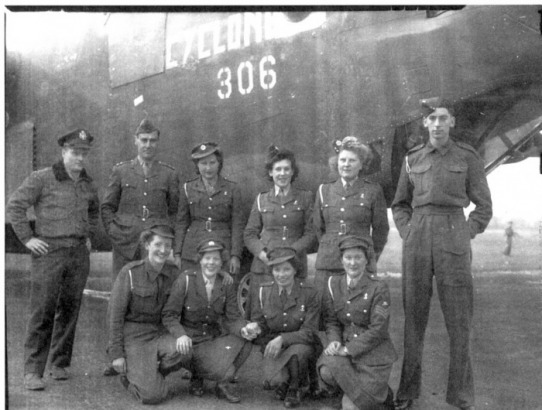 This picture was taken on 20 Sept 1944 at Halesworth, the home of the 489th BG.  After serving with the 389th BG at Hethel, the plane was transferred to the 489th in the summer of 1944.  The people pictured in front of the plane were members of the Auxiliary Territorial Service, from Acle, Norfolk.  Cyclone was eventually declared war weary and salvaged.