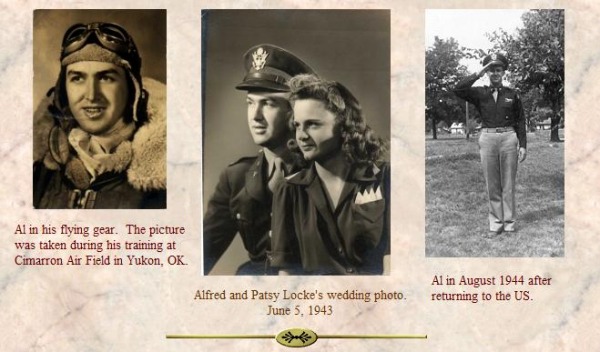 As my Grandfather died when I was not quite 2 years old, I never had the privilege of knowing the man that he was.  When my parents asked me to help put together a scrapbook of his war years this summer, I had no idea the project would have such a huge impact on my life.  Reading his letters and learning about the things he accomplished during his military service has allowed me to come to know him in some small way.
Finding Dale on the internet B-24 lists was a large blessing as well.  He has shared his life, both past and present, with me and has come to mean a great deal to me.  I am grateful that he is still on this earth and that he is willing to talk with me and others about the war years and his memories of my Grandfather.  I am proud to call him my adopted Grandfather- and I am sure that Grandad would approve!
-Melinda Staley

I was the tail gunner on Al Locke’s crew from the time we began training with the 448th B.G. in the summer of 1943 until our tour of combat duty was cut short by our ditching in the North Sea on April 29, 1944.  I had supreme confidence in him and believed that whatever the situation, he could pull us through.  His ability as a pilot was a major factor in our being selected to become a PFF lead crew in February, 1944, after having flown eight missions.
I guess one of the things I most appreciated about my pilot was that he was not a “hot-shot” like some others.  He took no chances with the lives of his crew.
I admired his ability to remain calm in any situation.  On one occasion during our training, I looked out the waist window just after we had taken off and saw gasoline siphoning out of one filler tube.  Using the intercom, I informed him of the situation, and his response was, “OK, we’re going back in,” with not a hint of excitement.  As for me, I just knew that the stream of gasoline was going to catch fire and blow us up.
Al took good care of us.  For example, our engineer, Virgil Carroll, was busted from tech. sergeant to private because our C.O. blamed him for not properly securing the filler cap, which, as it turned out, was defective.  Virgil was understandably furious and insisted he was going to refuse to fly.  Al came to our barracks and assured him that he would have Virgil’s rank restored shortly.  That promise was kept.
Had it not been for his skill in flying the B-24, I wouldn’t be here.  On our last mission we lost one engine and had another hit badly enough that its rpm’s were substantially reduced.  As a result, we dropped from our lead position to the rear of the formation, and as I sat in my tail turret I saw four straggling Libs get shot down.  Had Al not been able to keep up with the formation in spite of the engine problems, I have no doubt but what we would have also been shot down.  He later received the DFC on the basis of that mission.
I admired him not only as a pilot but also as a person.  He had a good sense of humor and never gave any evidence of feeling himself better than his enlisted crew members.  Moreover, his morals were impeccable.  A majority of the married men that I knew in service, even though they loved their wives, were not very faithful to them.  Al, on the other hand, never gave even the slightest hint of desiring any female companionship other than that of his wife, Pat.
In my eyes, he was an excellent pilot and an even better person.
Dale VanBlair

A Letter from Mrs. Reed

Mrs. Henrietta Reed corresponded with many of the crew members who survived the ditching, including my Grandad.  The pride she felt for her son extended to all those who served with him in April 1944 and all the men who served their country in any capacity.  Even in her grief over the loss of her son, she still had the strength to encourage those who lived on.  I believe that her letters were in part responsible for helping my Grandad come to terms with the loss of his friends and the responsibility he felt for it.  I share her first letter to my Grandfather with you all as it touched my heart and expresses some of the feelings I have for all who served in the war effort.
- Melinda Staley

September 28, 1944
Dear Lieutenant Locke,
It was very kind indeed of you to write, and we are deeply grateful, especially knowing it was a difficult thing to do.  We have known for some time that there was a very strong chance that Ken did not survive.  The war department kept saying “missing’, but we received a letter from a friend of Ken’s some time ago which said otherwise.  In that way we have lived with this possibility for some time, so that what you wrote did not have the element of surprise.  I am very sorry indeed to note your address and regret my having pestered you.  To be truthful, though, I am very glad indeed to have the facts.  So many things about the events of April 29th kept worrying us.  There is a kind of relief, even though very sad, in knowing the facts.  I hope so very much that you and the other survivors do not feel too badly about it all.  Which is much easier said than done.  And I hope, too, most sincerely that you all recover from your physical injuries.  It was sweet of you to add what you did about “Kayo.”  We treasure your dear words.  The way we try to make ourselves think is that since it is so, there are many good things about it.  Ken was with friends he admired and respected.  All of you were, and some still are, doing what you wanted to do in regard to the war.  And you were doing it very well indeed, so that folks and your country are immensely proud of you.  Those who went away, went with dignity and honor in the company of good friends of the very finest type.  Their precious adventures had been with friends they were proud to know.  And I have a feeling that they are still having grand times,- with everything ideal.
I have heard too from Lt. John Hortenstine.  I sent the same questions to him, but I believe he did not receive them, as he does not mention them,- which is just as well.  He just wrote a regular letter, and at the end spoke kindly of Ken, as you did.  What he says is practically the same as what you write.  Our minds are now at rest.  We picture the North Sea as the grave of Ken and of Harold and John.  Of what was mortal.  But not of the boys themselves.  That glory is beyond us now.  It is over now, and none of the five want us to be sad, I feel very sure.  Being only human and not able to know and understand, we can only hope and believe, and do the best we can.  And that’s all we’re supposed to do, ever.  I am very, very grateful Ken got to know you all.  And I’m happy too that I know you a little.  I’m sending you a snapshot of “Kayo” taken here at home when was on leave.  It was on his 23rd birthday, May 21, 1943.  I think of the twelve of you almost always,- my very best wishes.
Sincerely yours,
Henrietta A. Reed, (Kayo’s mother)